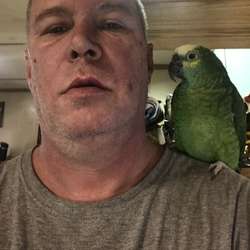 my life after richard

well to start off correctly when they started talking about legalizing same sex marriage me and richard talked about it we were both ready. we felt we had been through everything possible that we could do a marriage, then right before they made it legal he passed away. before he died about a month before, he sat down at breakfast on dec 30 and calmly brought up his death. he brought up his pets asking me to promise to keep them and not rehome them because bella and andy the 2 dogs had never known anyone else, i lost bella last year on mothers day, i still have andy she will be 14 in august we have had her since her birth we had her mother. andy is starting to show her age. and then mozzy the parrot is 22 years old, they live 80 years, so i have planned before my departue from this world he is to be given to a zoo or sanctuary. he also said the his wish was to die before me because i was stronger than he was and i could keep going, if i died before him he was afraid he wouldnt be able to move on, and he hoped he died without me being with him, he did not want that to be my last memory of him, he died in his sleep, three days before he died he wasnt doing well i had to help him bathe, go to the restroom and walk, as i look back on i did watch him die slowly, i often wonder if he had a sense he was going to die or if he planned it, i dont think he planned it but i do think he knew in some form because he did things to make sure i would be ok his aunt gave him money to use for a down payment for a car, when he bought the car he put my name on it he bought the car jan 2 2014 he died jan 26 2014.

our trailer was paid for so at the time there was no worry there, but then in 2018 the park i lived in was closing and we all had to move my trailer was to old to move, so i found another trailer with the land for sale and i moved, i think it was time to move i had grown depressed and stagnant and i kept thinking about our talk and finding him that sunday morning. and we had problems with the neighbors as they liked to pick fights with us about our yard they kept putting a garden in our yard and then would throw a fit if we went out there, finally before he died we had to call the police to come out and tell them not to come in our yard.

since i moved i have been doing ok i brought only the animals my clothes and some thing we bought each other that has memories of us, it almost all fit in the book shelf here, then i brought his paintings.

i love this new trailer it was like a new beginning for me, i do have 2 roommates with their baby. i have good days and off days kathie one of my roommates says when im not acting right she can sense richards presence. some times aaron the other roommate will mention memories of richard, that i never told him about, like early in our relationship we moved out here in the same town im in now not far from where i live, we at the time felt we had no one we felt alone, richard at one point wasnt doing well and had to go to behavioral health, i went to see him every day then one day the friend we ere staying with at the time her car stalled and had to be put in the shop, so i called richard and told him i wouldnt be able to come til the next day, he started crying and told me he needed me to come that night, so i got off the phone and borrowed a bicycles and rode the bicycle 30 miles to see him, i remember my feet and lower legs burning, a few days ago aaron was talking about me and richard and how i never gave up on him, he said your feet and legs were burning from walking or something for richard, i never told aaron about that night. some time he will also say things as im telling him something about richard that i might have left out, like he was there.

my focus now is my meds as they are important to my sanity, my pets to give them the best possible life i can. relationship? i dont see myself in one as i feel it would dishonor richard. my family doesnt have much to do with me because of my mental status and life style. i have 3 sisters older than me i lived 2 miles from 2 of them and never saw one, the other i saw once a year, i call them they talk for like 5 minutes and then have to go. they plan get togethers and seldom include me so i moved to give a reason. i often feel i could be dead in my house for days before anyone misses me, thats my reason for having roommates. my family sees me through different standards than they see others. you see im happy with what i have even if it is nothing, in there eyes i didnt try hard enough, i dont have a new car, my home needs work its not a show place, maybe in their eyes i didnt try or settled, but i did what was important to me my pets and learning about them, i worked and paid my bills, yes because of my choices i had a hard start but i made it and thats whats important